Pierre-Emerick Aubameyang scored a superb hat-trick to send Arsenal through to the Europa League final to face Chelsea after a clinical 4-2 win at Valencia (7-3 on aggregate).

Valencia halved the two-goal deficit from the first leg through Kevin Gameiro’s close-range finish, but Aubameyang gave Arsenal further control in the tie with a fine half-volley shortly after 17 th minutes.

Alexandre Lacazette then put the Gunners ahead on the night with a finish into the corner from 15 yards, meaning Valencia needed four, and they got one through Gameiro’s bundled finish.

But Arsenal regained their advantage through Aubameyang’s near-post finish, and the Gabon striker got his hat-trick and 29th of the campaign with a thumping effort from an acute angle.

Chelsea beat Eintracht Frankfurt 4-3 on penalties to progress to the Europa League final after the two sides were locked together 2-2 on aggregate following extra time on Thursday night.

Ruben Loftus-Cheek had given Chelsea a 28th-minute lead with a well-taken goal, the England midfielder’s 10th of the season, four of which have come in this competition.

However, in-form forward Luka Jovic drew the visitors level four minutes into the second half with his 27th strike of the campaign, before the semi-final, second leg went to penalties.

And despite Cesar Azpilicueta seeing his spot kick saved by Kevin Trapp, Kepa Arrizabalaga then kept out two Frankfurt penalties to be his side’s hero in the shootout, before Eden Hazard coolly rolled home the final penalty to set up a final with Arsenal in Baku on May 29. 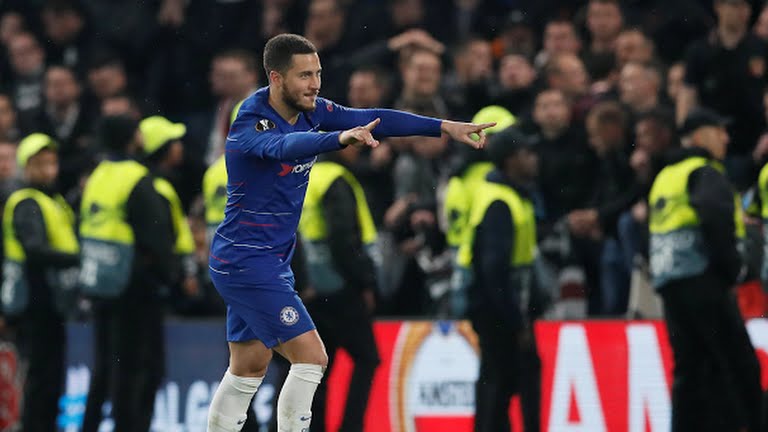