Real Madrid playmaker Eden released the Borussia Dortmund winger into the left side of the penalty box, where he cut back inside before drilling the ball into the top corner after 19 minutes.

Eden Hazard made it 2-0 in the 33rd minute when he volleyed the ball in from Romelu Lukaku’s knockdown.

The former Chelsea winger added a third just before half-time, slotting home an unselfish cutback from Kevin De Bruyne after the Manchester City midfielder had raced clear on goal.

Lukaku powered in a fourth with 18 minutes left as Belgium maintain their perfect qualification record to seal top spot.

Croatia made sure of qualification from Group E as they beat 10-man Slovakia 3-1 in Rijeka.

The visitors had taken a surprise lead in the 32nd minute through Robert Bozenik but Nikola Vlasic fired Croatia level after 56 minutes with a low finish, before Bruno Petkovic headed in from a corner on the hour.

Slovakia saw winger Robert Mak sent off for a second yellow card, with Ivan Perisic’s volley sealing a place at Euro 2020 for the World Cup runners-up. 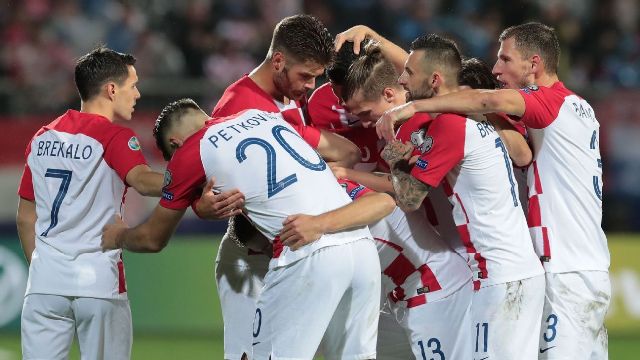